Why do hydraulic hoses rupture?

Hydraulic hose is a kind of hose commonly used in hydraulic systems. It is mainly used to convey hydraulic oil, and is often used in equipment such as excavators that require hydraulic hoses.

The structure of the hydraulic hose is usually divided into three parts: the inner rubber layer, the outer rubber layer and the steel wire reinforcement layer between the two. The use of hydraulic hoses must comply with the use specifications. If the use method is wrong, serious consequences will occur, affecting the work schedule and even causing personal damage.

After using the hydraulic hose for a period of time, if the hose is found to be broken, and the outer rubber layer of the broken portion is removed, the braided wire and steel wire in the reinforcement layer will be broken and rusted. This problem led to a decline in the performance of the skeleton layer, weakened the strength of the hose, and reduced its bearing capacity. Therefore, when the material that exceeds this part's pressure-bearing capacity is transported through the problem area, the rubber tube will break. The reason for this problem is caused by the improper use environment of the hose. For example, long-term use in the environment of moist or corrosive substances such as acid and alkali causes the skeleton layer to age rapidly.

Another phenomenon is that when using hydraulic hoses, it is found that the skeleton layer has broken irregularly, and there is no rust and other phenomena, that is, it is not caused by a humid environment or corrosive substances. The study found that this is because the pressure resistance of the hydraulic hose itself was not taken into account when conveying the material, allowing the hydraulic hose to convey high-frequency materials that exceed the rated working pressure. Some people will encounter some hoses broken, but the fault is very neat. This is because the pressure of the material conveyed by the hydraulic hose is too large, which exceeds the bursting pressure of the hose, which is the maximum pressure capacity. 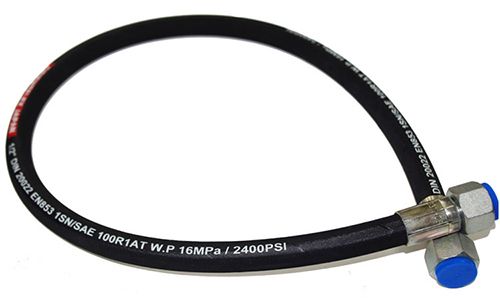